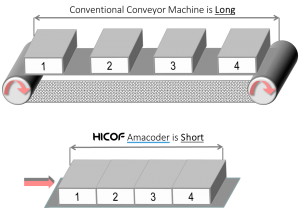 Automatic cartoner lines operate either intermittent (indexed) or continuous. Continous lines are capable of very high box throughput but are expensive and  large. On the other hand, intermittent running cartoner machines are compact, cost effective but usually limited to a speed of 150 packs/min what is  sufficient for most applications.

Hicof is the first and only company, offering a coding/ labeling line which works intermittantly. The unique, patent applied concept of the Amacoder is the use of pushers for transporting the boxes through the machine. Therefore, no conventional conveyor is used.

It works as follows: Boxes, coming from an upstream machine e.g. a cartoner or checkweigher, are transported by a conveyor to the infeed plate of the Amacoder. A feeding pusher (1) from the side shifts incoming boxes laterally onto the transport slide, in front of a second pusher (2) which shifts the boxes through the Amacoder. After a stroke of the pusher, it retracts to its initial position, leaving room for new boxes, introduced from the side. This cycle is repeated permanently, resulting in an indexed, highly controlled movement of the stack of boxes (3) through the machine.

Working Principle of the AMACODER 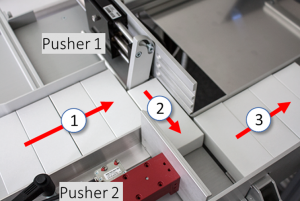